We live in a world where Kim Kardashian and Pete Davidson are dating. These past few years have been nothing but an unexpected mess of nonsense, but this? This is a duo no one could have predicted. Dating rumors spread faster than a wildfire after Kim and Pete were spotted holding hands at Disneyland in October of last year. This cuddled up pairing shocked the world and had everyone asking, is this a PR stunt or true love?

We all know the Kardashians are professionals when it comes to publicity stunts and staying relevant in the limelight. So, it is no coincidence that the Kardashians new Hulu Show, “The Kardashians’ ‘, premiered just a few short months after in April. What better way to promote your reality TV show than giving people the randomest couple ever right after a horrendously public divorce. To add, some have even speculated that the few paparazzi photos fans do have of the suspected couple seem to be frauded. One TikTok user, @cami.twomeyy, posted a video showing that a cute photo of the new couple holding hands while shopping together seemed to have been planned. A video of this moment was shared and you can see the couple holding hands for about two seconds, leading fans to think they wanted one cute picture and nothing else. Not to mention, this is a genius way to change the topic from some current Kardashian/Jenner scandals including Kim’s comment on women slacking in the work force and Travis Scott’s AstroWorld tragedy. Twitter quickly caught onto this and shared their opinions. 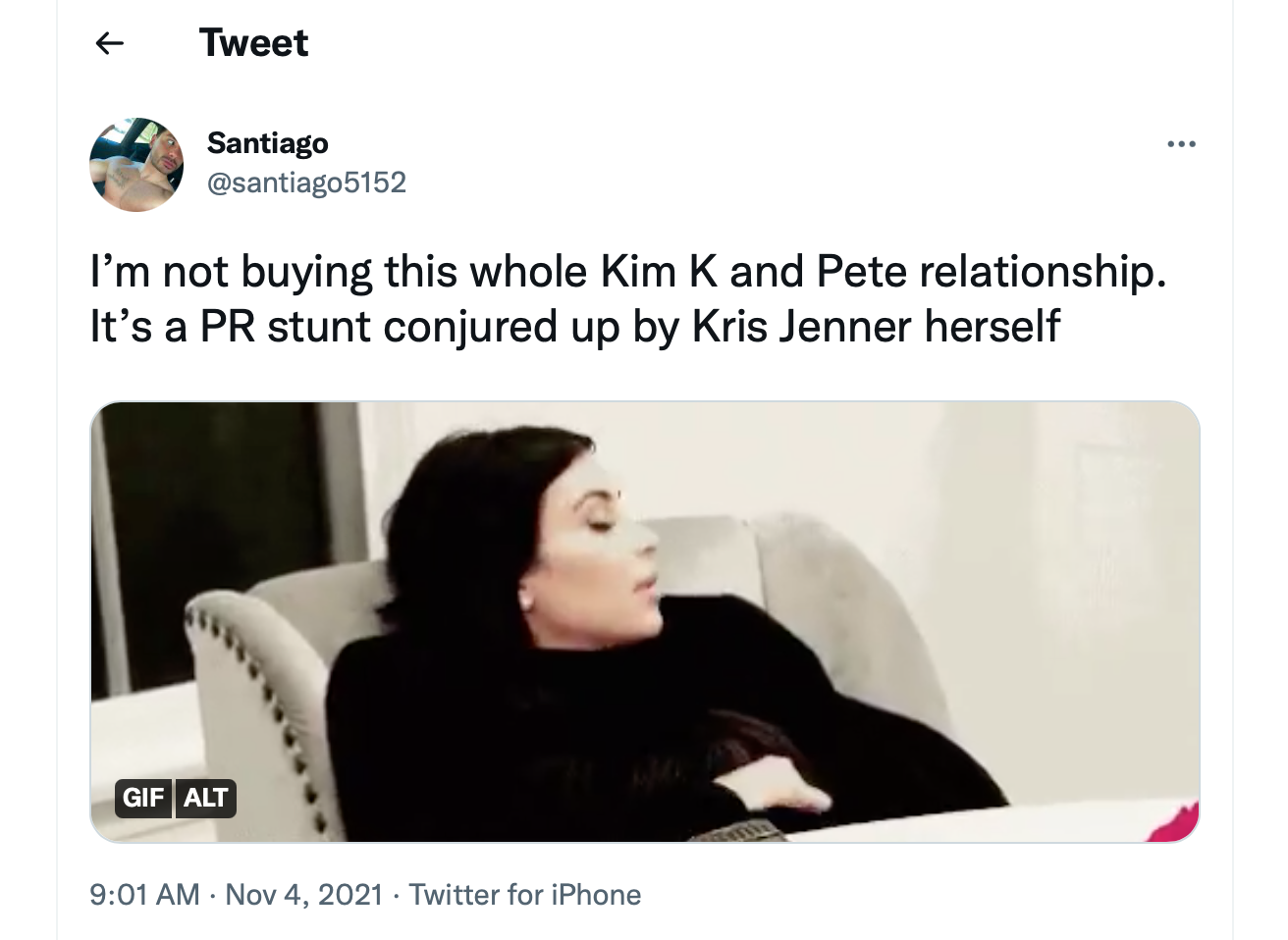 However, some fans are looking past all of this and see true love between the two. Having the inside scoop of what a date between these two looks like is something everyone is dying to see. However, TMZ reported that Kim has had no cameras around when she and Pete are together. For someone who films just about every part of her life, this only makes their relationship seem all the more real. While this relationship seems very coincidental, it is obvious in the small amount of evidence we do have that Kim and Pete do actually enjoy being with each other. An anonymous source told E! News, “Kim loves that they just laugh the entire time they are together and she is really enjoying hanging out with him.” and, “They have mutual friends in common, so they will probably hang out again, but everything is casual.”. The pairing is unlikely but you know what they say, opposites attract.

After dealing with a tragic divorce with the father of all 4 of her children, Kim deserves a bit of fun. Whether this is true love or not, they seem to genuinely enjoy eachothers company. Time can only tell where this relationship will go but for now let’s all just admire their insanely adorable Instagram posts together. (And let’s see how many tattoos Pete gets for her.) Have You Analyzed Your Social Networks, Lately?